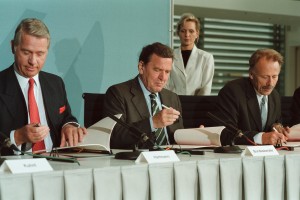 On 11 June 2001 Schröder signs an agreement to phase out nuclear power. Seated on his right is Jürgen Trittin, Germany’s environmental minister; on his left is Ulrich Hartmann, the CEO of the energy provider E.ON (photo credit: Marco Urban).

In 2000 Gerhard Schröder reached a consensus with German power utilities to phase out nuclear energy. The new policy halted the reprocessing of fuel rods and restricted the disposal of radioactive waste to temporary and permanent facilities located near reactors. The decision ended one of the most contentious debates in postwar Germany, symbolized by violent protests at nuclear power stations in Wackersdorf, Brokdorf, Gorleben, and elsewhere. The nuclear phase-out was part of a massive shift in Germany’s energy policy toward sustainability. At the heart of this shift was the German Renewable Energy Act (EEG), which was designed to promote the use of renewables by setting favorable grid feed-in tariffs for renewable energy suppliers and by fixing a minimum price for clean power. Due to its success – the share of renewables in Germany’s power production doubled between 1998 and 2005 – the legislation has since served as a model in more than 60 countries. Today, the world sees Germany as a pioneer in national resource conversation and climate protection. In 2010, Chancellor Merkel’s administration decided to put the nuclear phase-out on hold, but later recommitted the country to abolishing nuclear power after the Fukushima disaster in Japan.