Opposition to the Iraq War 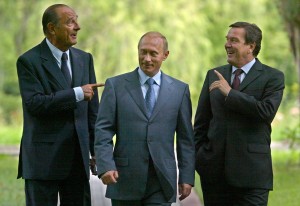 In order to prevent the invasion of Iraq, Germany allied itself with France and Russia, both of which possess veto power on the UN Security Council. Close collaboration took place between French President Chirac (left), Russian President Putin (center), and Chancellor Schröder. The above image is from a meeting in 2004 (photo: DPA).

In the summer of 2002 Gerhard Schröder announced that under his leadership, Germany would not participate in the Iraq War. He was not persuaded by the shifting justifications for war offered by the U.S. government, which included the supposed existence of weapons of mass destruction. Remaining steadfast in his “no” to the war, Schröder formed an alliance with French President Chirac and Russian President Putin. Although the majority of Europeans rejected the war, governments were unable to agree on a common stance. In a public declaration, state and government leaders from Spain, Portugal, Italy, the United Kingdom, the Czech Republic, Hungary, Poland, and Denmark announced their support for the war, while the opposition party in German parliament, under the leadership of Angela Merkel, expressed openness to Germany’s involvement. On 20 March 2003 the United States and the “coalition of the willing” invaded Iraq, intent on overthrowing Saddam Hussein’s regime. The last remaining U.S. troops were not withdrawn until 2011; no weapons of mass destruction were ever found. According to independent estimates, at least 100,000 people died in the Iraq War and the sectarian violence that followed it.